The Road to Food Sovereignty 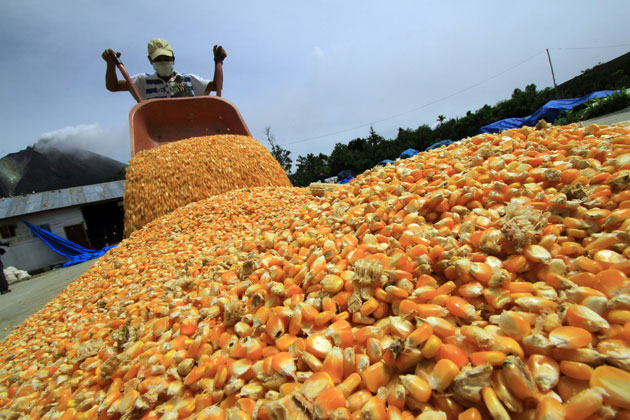 Corn in grain in Anzoátegui State-Venezuela

Industrial agriculture isn’t the efficient beast it’s made out to be. Peasant farming, not industrial food production, is the way to feed the world, argue Pat Mooney and Nnimmo Bassey

Time is running out if the world is going to slash greenhouse gas emissions enough to keep us below a 1.5°c temperature rise by 2100, an aspiration set by the Paris climate accords.

Two conferences this autumn tackled different ends of the problem, in splendid isolation from each other. The UN Committee on World Food Security held its annual meeting in Rome in mid-October, alarmed that the number of hungry people on the planet has suddenly climbed by 40 million in the past year – much of it due to the direct and indirect effects of climate change – and fearful that an unpredictable climate will cut global food production still more sharply in the decades ahead.

Meanwhile, the UN Framework Convention on Climate Change (COP23) met in Bonn and high on its agenda was the need to cut agriculture’s GHG emissions which experts say account for anywhere from one third to more than half of global warming. So, what for Rome delegates is a problem of food security is for Bonn delegates a problem of climate security.

The solution for both climate and food sovereignty is to dismantle the global industrial agri-food system (which we call the ‘industrial food chain’) and for governments to give more space to the already growing and resilient ‘peasant food web’ – the interlinked network of small-scale farmers, livestock-keepers, pastoralists, hunters and gatherers, fishers and urban producers who, our research shows, already feed most of the world.

In our report delivered to policymakers in both Rome and Bonn, Who Will Feed Us?, ETC Group (the Action Group on Erosion, Technology and Concentration) provides original data about the importance of peasant food systems and the real economic, environmental and social cost of industrial agriculture.

Aside from burning vast quantities of fossil carbon, industry is also wasting money that could be directed to supporting equitable agroecological production while still lowering food prices for the world’s marginalized consumers.

The statistics are staggering. Consumers pay $7.5 trillion each year for industrially produced food. But between a third and half of this production is wasted along the way to the consumer or at the table: spoiled in the field or in transport, rejected from grocers because of blemishes, or left on the plate because of over-serving.

Conversely, households in OECD countries consume about a quarter more food than is needed – leading to obesity and related health problems.

The total food overproduced each year is worth $3.8 trillion – a combination of $2.49 trillion worth of food waste and $1.26 trillion of over-consumption (see footnote 191 of the report). Burgeoning waists worldwide also have both human and economic costs.

Added to the amount spent by consumers, this makes the real cost of industrial food $12.4 trillion annually.

Policymakers negotiating the future of food and climate may wonder if it is possible to make such a dramatic change in our food production. Peasants may feed 70 per cent of the world’s population now but can they adapt quickly enough to climate change to feed us in 2100? Which system, the industrial food chain or the peasant food web, has the track record, innovative capacity, speed and flexibility needed to get us through the unparalleled threat of an unpredictable climate?

The answer is clear. Take experience: over the last century, the industrial food chain has not introduced a single new crop or livestock species to production but has cut the genetic diversity of our crops by 75 per cent, reduced the number of species by about one third, and reduced the nutritional value of our crops by up to 40 per cent. The peasant web has introduced 2.1 million new plant varietieswhere industrial agriculture has only introduced 100,000over the same time frame.

The industrial food chain works with only 137 crop speciesand five main livestock species. Stunningly, 45 per cent of the industry’s research and development targets just one crop: maize. By contrast, the peasant web is breeding and growing 7,000 different crop species and 34 livestock species – like the alpaca, ñandu, and guinea pig.

Peasants also have the track record of dealing with new conditions quickly and effectively. Recent history is replete with evidence that peasant producers – before there were telegraphs or telephones or railways – have adapted new food species (through selective breeding) to an extraordinary range of different climatic conditions within the span of only a few human generations

The peasant web is breeding and growing 7,000 different crop species and 34 livestock species – like the alpaca, ñandu, and guinea pig

This process of seed and knowledge sharing from farmer to farmer is how maize spread across most of the regions of Africa and how sweet potatoes were planted everywhere in Papua New Guinea from mangrove swamps to mountain tops – all in less than a century – and how immigrants brought seeds from Europe that were growing across the Western Hemisphere within a generation.

When we compare the track record of the industrial food chain to the peasant food web we must conclude that our century-long experience with the chain shows that it is just too expensive, and it can’t scale up. Meanwhile, with almost no support from governments, the peasant food web is already feeding 70 per cent of us (see page 12) – and could do much more, while producing drastically less greenhouse gas emissions than industrial methods.

To be clear, ‘peasant farming as usual’ is not an option. Climate change will mean our over 10,000 years of agriculture has to deal with growing conditions that the world hasn’t seen for three million years.

There is no reason to be sanguine about the problems ahead.

Peasants can scale up if the industrial chain gets off their backs. Governments must recognize peasants’ rights to their land and seeds and support fair, peasant-led rural development and trade policies. We need to cut waste and shift our financial resources to strengthening the peasant food web and both tackling climate change and ensuring food sovereignty.

The ETC Group’s publication, Who Will Feed Us? which compared peasant farming and industrial agriculture, can be downloaded in English and Spanish from their website.

« The Long Ecological Revolution
Birth of the First Ecosocialist International »