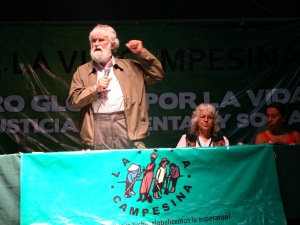 Modern Constitutions are grounded in an anthropocentric social contract. They do not include the natural contract; the accord and reciprocity that must exist between human beings and the living Earth, that provides us with everything and whom in reciprocity we care for and preserve. For that reason it would be natural to recognize that the Earth and the beings that comprise her are bearers of rights. However, classic contractualists such as Kant and Hobbes viewed ethics and rights as belonging only to relations between humans. They acknowledge human obligations only towards other beings, especially animals, in the sense of neither destroying them nor subjecting them to unnecessary suffering or cruelty.

The failure to consider that each being has intrinsic value, independent of its human use, its rational use, and that it is the bearer of the right to exist within the same common habitat, the planet Earth, has opened the path for nature to be treated as a mere object, to be exploited with no other consideration, in some cases, to the point of exhaustion. However, it fell to Latin America, as Eugenio Raul Zaffaroni, noted criminal lawyer and Justice of the Supreme Court of Argentina, shows in, Pachamama and the Human, (La Pachamama y el Humano, Ediciones Colihue 2012), to develop a constitutional theory of an ecological nature, where the Earth and all natural beings, particularly the animals and other living beings are endowed with rights. They must be included in the modern Constitutions that have put aside the deeply rooted anthropocentrism and the dominus paradigm of the human being as lord and dominant master of nature and of the Earth.

The new Latin American constitutionalists unite two currents: one, the more ancestral, is that of the original Nations, for whom the Earth (Pacha) is mother (Mama), hence the name, Pachamama, and is entitled to rights because she is alive and gives us all that we need, and, in the end, because we are part of and belong to her, in the same way as the animals, woods, jungles, waters, mountains and landscape. They all deserve to exist and to coexist with us, forming the great community and cosmic democracy.

They integrate this ancestral, efficacious, tradition of the Andean culture, that stretches from Patagonia to Central America, with the new understanding, derived from contemporary cosmology, genetic and molecular biology, and systems theory, that understands the Earth as a living super-organism that self regulates, (Maturana-Varela and Capra’s autopoiesis), seeking always to maintain life and the capacity to reproduce and to make it co-evolve. This Earth, called Gaia, consists of all beings, and generates and sustains the fabric of life in its vast bio-diversity. The Earth, as a generous Mother, must be respected, recognizing her potentialities and her limits, and therefore, accepted as a bearer of rights, -the dignitas Terrae– the basis for making possible and sustaining all the other personal and social rights.

Two Latin-American countries, Ecuador and Bolivia, have created a true ecological constitutionalism; in that regard, they are ahead of any other“developed” country.

The 2008 Montecristi Constitution of the Republic of Ecuador, explicitly says in its preamble: “We celebrate nature, Our Pacha Mama, of whom we are part and who is vital for our existence”. It then emphasizes that the Republic proposes to build “a new form of citizen coexistence, in diversity and in harmony with nature, to attain the good living, or sumac kawsay (plentiful life)”. In article 71º, chapter VII states: “nature or Pachamama, where life is reproduced and realized, has the right that her existence be wholly respected, the maintenance and regeneration of her vital cycles, evolutionary structure, functions and processes; all persons, communities, people or nationalities can demand of the public authority the fulfillment of the rights of nature… the State will encourage the natural and juridical persons, and the collectives, to protect nature and will promote respect for all the elements that form an ecosystem”.

The words of the preamble of the Political Constitution of the Bolivian State, approved in 2009, are moving: “Fulfilling the mandate of our peoples, with the strength of our Pachamama and thanks to God, we again found Bolivia”.Article 33º prescribes: “persons have the right to a healthy, protected and balanced environment. The exercise of this right must allow individuals and the collectives of the present and future generations, including other living beings, to develop in a normal and permanent manner”. Article 34º disposes:“any person, as an individual or in the name of a collective, is allowed to undertake legal actions in defense of the environment”.

Here we have a true ecological constitutionalism that has taken shape and form in the respective Constitutions. Such visions are forerunners of what should be included in all of humanity’s future constitutions. Only with such a mind and disposition will we guarantee a happy destiny on this planet.

Leonardo Boff was born 14 December 1938 in Concórdia, Santa Catarina state, Brazil. He is a theologian and writer, known for his active support for the rights of the poor and excluded. He currently serves as Professor Emeritus of Ethics, Philosophy of Religion and Ecology at the Rio de Janeiro State University.