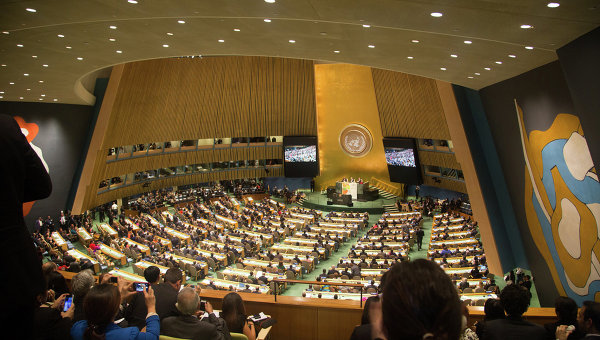 New York – October 26, 2018 – The “UN Declaration on the rights of peasants and other people working in rural areas” was presented in the UN headquarters to the Third Committee of the General Assembly on 25th October. This comes on the back of a nearly two decade long process of consultations and negotiations led by millions of peasants from La Vía Campesina, along with pastoralists, artisanal fisher folk, agricultural workers and indigenous peoples’ organizations, with the support of CETIM and FIAN International. The Declaration, if accepted can ensure that the rights of rural populations are better recognized and protected by the international community.

As it stands, peasants suffer from hunger and poverty at a disproportionate level**. It is estimated that out of 821 million people suffering hunger in the world (2018 UN figure), 80% live in rural areas. These people are particularly vulnerable and discriminated, they suffer forced expulsions and lack access to essential resources: land, seeds, loans, education, justice and basic services. They have unequal access and control over land, genetic resources and other natural resources; suffer from restricted access to markets and means of production to ensure a decent livelihood and are constantly imposed agricultural policies skewed in favour of elite farmers and of industrial agriculture. Yet, on average, small food producers contribute 70% of the world’s food, with this figure rising to more than 80% in so-called developing countries. Small scale food producers also play a decisive role in the fight against climate change and biodiversity conservation.

“There is no free and healthy citizen without free peasants: our freedoms and rights are prerequisites of the right to food, social justice and democracy for all mankind. This Declaration will provide a universal Human Rights frame to all the efforts and initiatives we peasants, all around the globe, take to feed our communities in locally adapted and sustainable ways, displaying great resilience, inventiveness and perseverance. For us, it is a vital source of legitimacy as it recognizes, in a single and coherent manner our existence, our specificities, our values but also our role to achieve food sovereignty, foster rural development, and sustain human life on Earth. We call for the widest support to the Declaration as it both gathers and globalizes the basic protections vital to our continuation and our development in such as changing world. Vincent Delobel, an organic goat herder from Belgium and also a member of La Via Campesina

A vast majority of the citizens support the Declaration. The European Economic and Social Committee has shown its support, and the European Parliament voted a resolution asking EU states to back the project. On 2nd October in France, the National Advisory Committee on Human Rights urged the French government, in an advisory opinion, to back the text. The Food and Agricultural Organisation (FAO) has also expressed its support to the Declaration and so has the former rapporteur on the Right to Food, Olivier de Schutter as well as his successor, Hilal Elver.

This past 28 September at Palais des Nations, home of the UN Human Rights Council in Geneva, 33 member states voted in favour and 3 voted against (Australia, Hungary and the United Kingdom) the adoption of the Declaration, while 11 of them abstained.

For the sake of consistency with the Paris Agreements on climate, the commitment to the Sustainable Development Goals 2030 (in particular Goal 2 to eradicate hunger) , the UN Decade of family farming and the commitments announced by the European diplomacy to build a fairer and more sustainable world, our governments should have the courage to take the right decision and to vote clearly and unanimously in favor of the Declaration.

Let’s recall that even if declarations are not binding, the existence of such an instrument is a clear and symbolic recognition of the fundamental role of small scale food producers worldwide who work hard to make a living and feed people, and hearten rural communities. The world needs this Declaration to foster sustainable food systems all over the planet and to make the world safer. 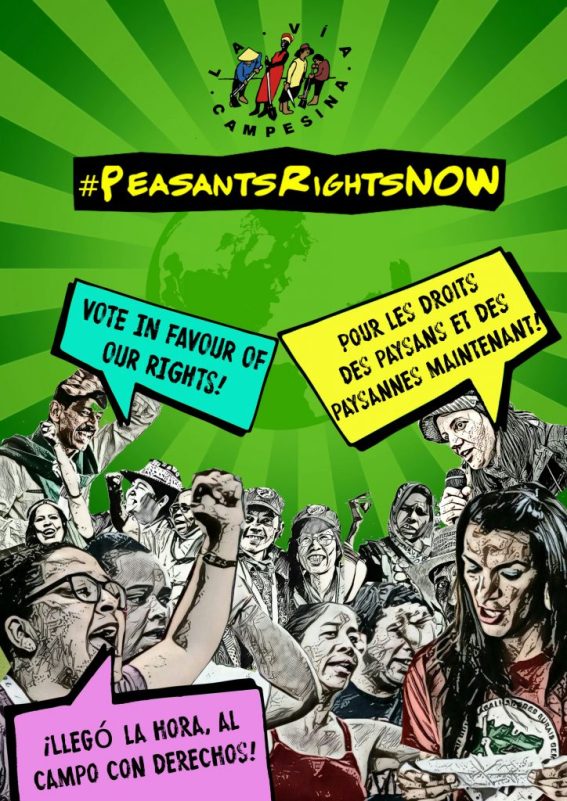 Notes to the editors:

* The “UN Declaration on the rights of peasants and other people working in rural areas” will be presented at the UN General Assembly. Following a last intergovernmental working group in April 2018 and a broadly affirmative vote in the Human Rights Council on September 28th, the Chairperson-Rapporteur of the Bolivian Mission in Geneva, M. Ruddy Jose Flores Monterrey, presented the resolution in favour of this new instrument aimed to bring together, specify and expose the rights of peasants and other agricultural workers, women and men.