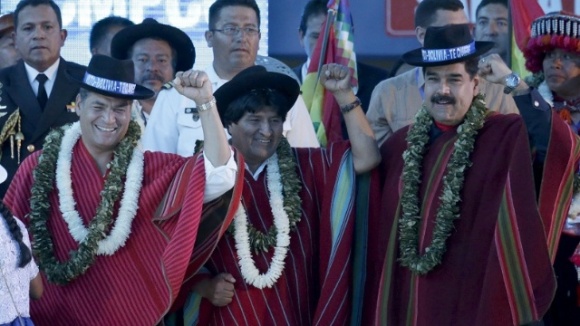 Bolivian President Evo Morales (C) gestures with the presidents of Ecuador and Venezuela during a closing ceremony of the climate change conference in Bolivia, Oct. 12, 2015.
http://www.teleSURtv.net

“For now, we are discussing a problem left to us by capitalism – climate change.” This was the conclusion of Bolivian President Evo Morales in his closing remarks to the October 10-12 World People’s Conference on Climate Change and the Defence of Life in Cochabamba.

More than 5000 people from more than 40 countries took part in the summit, established to give a voice to the poor and marginalised victims of climate change. Proposals and demands agreed on at the summit will be taken directly to the United Nations climate talks in Paris starting on November 30.

Morales used his closing speech on October 12 to remind Latin Americans that they have a responsibility to continue to fight against imperialism, colonialism and capitalism.

The country’s first indigenous leader was speaking on the Day of Indigenous Resistance – as “Columbus Day” is known in Bolivia. He declared that more than 500 years after Spanish colonial conquest, Bolivia was free from imperialism.

“We have liberated ourselves from imperial domination and neoliberal politics,” he said.

He said that Bolivia has recovered control over its resources thanks to the power of social movements, but the United States was planning invade other countries to “rob their economy” and “loot their natural resources”.

Morales said that “new generations, out of principle for life and humanity, have to be anti-imperialist”.

Venezuelan President Nicolas Maduro also addressed the summit that day, calling on the people of the world to take a stand at the upcoming climate change talks in Paris to pressure world leaders to take decisive action.

“Only the people will save the planet, we cannot trust in the oligarchy or the International Monetary Fund,” Maduro said.

“May the voice of the people be heard in Paris,” the Venezuelan leader insisted to loud cheers and applause from the large crowd.

Maduro warned that powerful countries would try to take advantage of the climate talks and interest in a so-called green economy to reinforce the international system that condemns countries to poverty and underdevelopment.

“Behind the mask there’s an even uglier monster. They want to turn the green economy into an instrument to recolonize us,” Maduro said.

Ecuadorean President Rafael Correa told the summit there could be no environmental justice without combating economic inequality and making rich countries pay their debt.

Climate justice cannot be achieved until affluent countries compensate poorer countries for the damage they have caused to the environment and end mass contamination.

In his address, the Ecuadorean president said everyone was responsible for protecting the environment, but the bulk of responsibility lies with those wealthy countries who contaminate the most.

He added that the most important solution to global warming is environmental justice, which would require the “largest contaminators to compensate those countries most affected by climate change”.

Morales presented the UN head with a 10-point plan to defend Mother Earth to be discussed at the Paris summit.

One of the Bolivian proposals is to create an Environmental International Court of Justice “to make it easier for countries to fulfill their international commitments to climate change”.

France’s Foreign Minister Laurent Fabius, one of the few representatives from a Western government at the summit, conceded: “Industrialised countries have a particular responsibility” when it comes to climate change. He urged attendees to “engage and show what direction the governments should follow” in their efforts to tackle the problem.

Bolivia’s ambassador to the UN, Diego Parry, told TeleSUR English he plans on presenting the summits views at the Paris meeting. “We want to hear the voice and the words of the people on climate change,” he said, “and to hear their proposals for discussion at the Paris summit in December.”

The main focus of the summit was to give grassroots activists and other ordinary people in the developing world a say on how future policy should be shaped.

According to the Global Climate Risk Index, in the past 25 years, about 95% of fatalities from natural disasters have occurred in developing countries. The rate of such disasters is expected to rise as the effects of climate change worsen.

At the conference, attendees heard that if the temperature of the planet rose by 2 degrees celsius, then an environmental catastrophe will be unavoidable. As well as natural disasters, large numbers of people would starve. For every 1 degree rise in global temperatures, grain yields are expected to fall by 5%.

Indigenous people from all across Bolivia arrived in Cochabamba with one simple message. “We just want to protect our beloved Mother Earth,” one delegate told TeleSUR english.