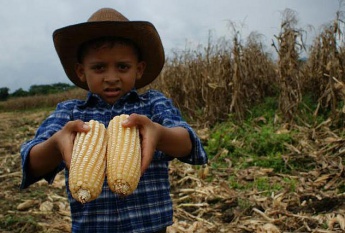 A young boy holds up corn in the fields of El Maizal communes. Five hundred hectares of corn are harvested collectively, while 500 more are made available for small-scale production. (aporrea.org)

Venezuelan president Nicolas Maduro announced on Friday his staunch support of the agricultural commune El Maizal after their communal property title was revoked by a Supreme Court judge earlier that week.

Initially, communards of El Maizal rejected the December 9 court decision and called on Maduro and other government bodies to uphold their claim in a public statement.

They claimed the land “belongs to the people and not the oligarchy,” and refused to recognize any mandate that “contradicts the principles of productive communal property” as set forth by the late socialist leader Hugo Chavez.

El Maizal was formed in Lara state during a 2009 initiative led by Chavez, in an effort to stimulate agricultural production and eliminate latifundio by delivering vast plots of privately-owned idle land to local farmers.

It is known today to be the most productive commune in the nation, boasting 500 hectares of planted corn equalling a yearly harvest of about 2500 kilos. Other crops include coffee, legumes and vegetables. 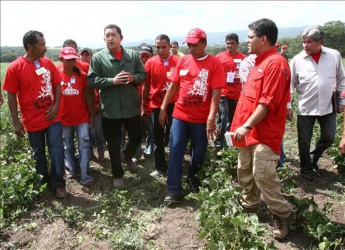 The commune, which today extends into Portuguesa state, is constituted by 22 communal councils who participate in its activities, which in turn represent about 7500 men and women. It has enjoyed numerous grants from government institutions to buy equipment and expand operations, as well as financial support for the construction of homes and public spaces in the lush mountain territory.

El Maizal is also in the process of building a corn flour factory, to combat the monopoly long controlled by the elite Mendoza family, who have used the distribution of this Venezuelan staple as a political tool against the current government.

In the statement released last week, communards wrote, “This is what the landowning oligarchy and the parasitic bourgeoisie is afraid of. They fear a self-governing people who appropriate the means of production, they are afraid of freedom and social justice becoming a concrete reality and not just a slogan…We will not permit the boots of the oligarchy and corrupt functionaries [accused within the judicial system] to crush the most beautiful flower of organization and production that Chavez created: the Socialist Commune El Maizal.”

In his famous “Strike at the Helm” speech preceding the Venezuelan leader’s death, Chavez expounded the benefits of communal structure in a socialist society, and urged state officials and citizens alike to take up the commune as its central cause.

Upon naming Maduro as his successor, Chavez reportedly emphasized, “Nicolas, I entrust this to you as I would entrust you with my life: the commune, the state of rights and of justice.”

Despite, however, such historic support, wealthy landowners and major cattle business FEDENAGAS have had measured success in winning back lands they believe were wrongfully appropriated.

More frequently, farmers and commune residents have been threatened, abused and even murdered by hit men hired by landowners trying to scare them off the property.

In his address on Friday, Maduro reaffirmed the commune’s claim that the Supreme Court decision was “counterrevolutionary” and promised to seek the “restitution of the constitutional legality of the agrarian charter for El Maizal.”

“I hope the outrageous decision of retracting the sacred title that Chavez gave the people of El Maizal is corrected,” he said.

Commune activists pointed out that its “no coincidence” that David Diaz, land rights activist of urban commune Ana Soto, was arrested just days before the court decision.

“They are trying to criminalize, neutralize, and annul the achievements of the revolution…” read last week’s communique.

“If political conditions change, will everything we have created through revolution fall apart?…” the document asked, concluding emphatically; “It’s time to analyze the [country’s] legal and judicial framework, so that no unpleasant surprises await us.”