Reflections from the Social Pre-COP

Written by Maruška Mileta from Young Friends of the Earth Europe; contributions by the Global Campaign to Demand Climate Justice.

A four day gathering of civil society and social movements (Social Pre-COP) on Margarita Island in Venezuela concluded on November 7th, after having given communities affected by climate change a voice in the run up to December’s UN climate talks in Lima (COP 20).

Representing those affected by climate crisis

The event brought together a diverse group of people from all over of the world – indigenous peoples, women and gender groups, youth, farmers, NGOs, grassroots groups – though it lacked voices from Africa and Asia due to unfortunate logistical challenges. The Pre-COP gave space to affected communities to speak about their struggles, connect in solidarity and send a strong message of climate justice to world leaders.

Juan Pedro Chang, a representative of the People’s Climate Summit in Peru (Cumbre de los Pueblos), said “that neither [the UN climate talks in] Lima nor the Social Pre-COP are Peruvian or Venezuelan, but belong to Latin America and the Global South, the main peoples affected by climate change“.

A member of the Movement for Climate Change and Social Justice from Bolivia, Oscar Rea, said that the meeting of the Social Pre-COP on Margarita Island is a step towards a global participatory democracy in which the reasons “for living well” are questioned. “Many people already came to these questions [why we live, how we live and why the climate is changing] because they were forced to emigrate as they ran out of water sources, for example,” he said. In this regard, Rea stressed that “if the leaders are not lucid enough to listen, millions of people are going to mobilise for change.”

Carolina Lara, an activist from the Ecuadorian Coalition for Climate Justice, stressed the need for the Social Pre-COP to be institutionalised in the decision making process of the UN, and at some point allow social organizations to vote for it. “The completion of this event proves that something is changing in the world and people are understanding that decisions are not made so as to be vertical, but focus more on the grassroots,” she added. 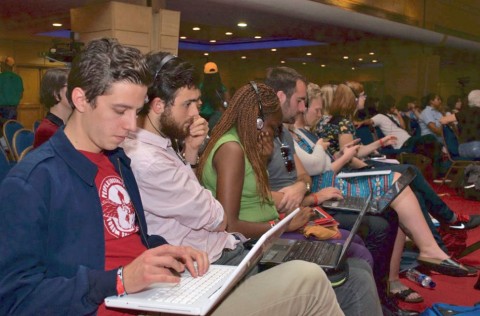 “My sisters and brothers from social movements and civil society groups from across the globe can bear personal testimony to the already devastating impacts of climate change on our lives, livelihoods and our ecosystems. They echo the warnings of climate scientists of existing impacts and the threat of catastrophic climate change as we breach tipping points“, said Asad Rehman from Friends of the Earth England, Wales and Northern Ireland during the ministerial meeting.

In line with these powerful words, civil society and social movements clearly stated to the ministers that we need meaningful climate action from rich developed countries, and that it needs to happen now. We need an adequately financed and a just transition to a sustainable energy world, based on the historical responsibilities of countries and corporations, and by respecting people’s right to fight poverty.

Those present warned against “false solutions” like geoengineering, REDD (Reducing Emissions from Deforestation and Forest Degradation), carbon markets, “climate-smart agriculture”, industrial agribusiness, mega-dams, “fracking”, nuclear energy and Carbon Capture and Storage (CCS) technology. Furthermore, they argued that it is necessary to use the framework of a global emissions budget to keep any global temperature rise below 1.5 degrees.

Participants stressed that a crucial way to achieve these goals is through better participation of civil society and social movements in decision making processes. They rejected the criminalisation of social protests, and the overbearing influence of private transnational corporations on both the political process and people’s lives. Instead, they demanded that we need to hear the voices of communities most affected by climate change.

Higher ambition for the 2015 global agreement

On Friday 7th the ministers discussed the process going towards the UN climate negotiations in Lima next month and in Paris in 2015.

The UN climate summit in New York in September had been held with the intention of securing promises of more ambitious cuts in greenhouse gas emissions from developed countries. While this did not happen, the strength of the people’s movement was clearly shown – 400 000 took to the the streets of New York on September 21st calling for climate justice.

Now, the main concern for ministers and negotiators should be how to raise ambition for climate action before 2020: close the gap on finance, technology transfer, mitigation and adaptation, guarantee significant amounts of new, predictable funds to the Green Climate Fund, create a global emissions budget to keep global temperature rise below 1.5 degrees, and establish a scheme for globally funded feed-in tariffs to catalyse the global energy revolution, which would allow developed countries to pay off their climate debt and give access to energy to the 2 billion without.

In the post-2020 agenda, a plan for higher commitments from rich developed countries has to be put on the table now, and their obligations need to be legally binding, measurable and verifiable.

Governments need to finally conclude the 20-year long negotiations, take real climate action, and agree to a just and ambitious legally binding agreement in Paris in 2015.

A week ago, the Intergovernmental Panel on Climate Change (IPCC) released their fifth Assessment ‘Synthesis’ Report in Copenhagen. The message of the scientific community is clear: Climate change is human-driven and the effects on communities worldwide can already be observed.

To tackle this biggest threat to humankind, it is critical to talk about equity – fairness or justice in the way people are treated. Not only is the need for an equitable approach to reducing greenhouse gas emissions enshrined in legal agreements on climate change – particularly through the “common but differentiated responsibilities” principle – but with such a small remaining carbon budget it is inevitable that the largest polluting countries (as measured by average per capita emissions and historical responsibility) must reduce their emissions by the greatest amount and very rapidly.

And as Professor Kevin Anderson argues, it is no longer possible for these countries to adequately reduce emissions only through switching from fossil fuel energy to low carbon
energy supply. Due to time constraints they will also need to reduce their consumption, particularly of energy, says Anderson.

Tackling climate change is ultimately a problem of the global ‘commons’ – and as such requires global solutions that tackle climate change in every country. In this sense, redistribution of wealth from rich countries to poor countries is necessary.
A fairer and more just world is not just a precondition for sustainable development, but also a necessity for preventing catastrophic climate change.

The preparatory meeting of the Social Pre-COP in July allowed civil society and social movements to articulate a vision for a social justice-based response to climate change and a world we want. At this November meeting civil society groups contributed to a document putting this vision into terms and recommendations that policy-makers can understand and work with, even though there were some challenges in achieving it, due to the experimental nature of the process. Now it is up to world leaders to listen, and it is up to us to continue building social movements, and in doing so, our influence.

The Pre-COP in Venezuela has been an unprecedented process for civil society in global climate policymaking. Now that the precedent has been set, we challenge the French government to create an even more open and participatory process for social movements in the lead-up to the COP 21 climate negotiations in Paris next year.