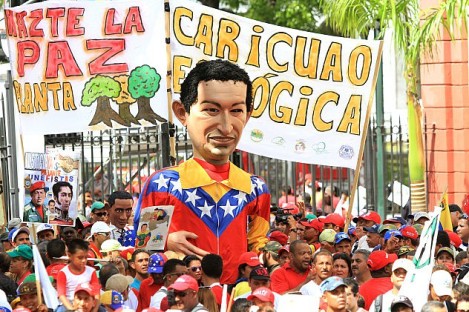 The problem of global climate change is distressing almost everyone. While a small minority may deny its existence, or question reports on its causes among the scientific community, it is universally recognized as a serious cause for concern.

The super-hurricanes over the last decade are closely linked to rising temperatures of sea water, and this is just a small taste of what may lie ahead. Something must be done, the question is what?

The responses of governments around the world to the environmental crisis, and its catastrophic weather events, have varied. Various treaties have been signed. Various international conferences have been convened to discuss the issue. A great deal of research has been conducted, and many different plans for changing the relationship of humans to the ecosystem have been proposed.

The Bolivarian Republic of Venezuela has just announced its plan to fight climate change. Claudia Salerno, Vice Minister for North America at the Venezuelan Mission to the United Nations, explained her country’s proposals fight climate change at a special meeting with the press May 30. She summed up the plan saying: “Venezuela’s contribution is to change the system, not the climate.”

As Salerno laid out the details of the plan, it became clear that the Venezuelan government is aware of what so many environmentalists in the United States cannot bring themselves to say. The failure of governments around the world to address the unfolding ecological crisis is caused by one thing: profits. The changes that desperately must be made to human civilization to stop the climate crisis all cut into the ability of billionaires to make money. They require that restrictions and regulations be implemented. “Our economies are damaging the environment,” Salerno declared.

Salerno pointed out what Venezuela has done. She talked of how the Bolivarian constitution protects the environment. Though Venezuela produces a great deal of oil, 70 percent of the country’s energy is hydroelectric. Venezuela invests $500 million per year into alternative energy. Already, the Bolivarian government has replaced 155 million inefficient light bulbs with newly developed eco-friendly ones. A program to replace other household appliances with more eco-friendly ones is in the works.

A total of 58 million hectares of forest in Venezuela are protected, and a mass program of reforestation is being carried out. The Venezuelan government has created a massive public transit system, and is the in process of expanding it. Plans specifically include connecting the countryside with the cities, and breaking down the division between the rural and urban parts of the country. Public transportation is much cleaner, much more efficient, and much better for the global environment.

Salerno explained that the effort to fight climate change must be “beyond the government.” A mass movement of public awareness must be created. The Venezuelan plan to fight climate change, as articulated by Salerno, includes expanding participatory democracy, and involving everyday Venezuelans in actively changing the economy and the culture. They include providing more free education, because “When you educate people, they pollute less.”

Changes made possible with revolution

The Bolivarian Republic of Venezuela is the product of massive struggles. Hugo Chavez began the process after being democratically elected, but almost immediately he faced an attempted coup by “opposition” forces aligned with the United States. After a mass uprising of everyday Venezuelans, and rank-and-file soldiers, the coup was pushed back and Chavez returned to power. Chavez built a mass movement of trade unions, community assemblies and others who backed his presidency and supported his policies. With a new constitution, Venezuela is now seizing the property of foreign capitalists, and promoting worker cooperatives. Chavez successor, Nicolas Maduro seeks to continue the “Bolivarian Process” begun by Chavez and the mass popular movement behind him. Their goal is the creation of a socialist society, and the debate goes on each day about how to reach this end.

The wealthy capitalists in Venezuela, and their allies in the United States and Britain, are seeking to overturn the Venezuelan government. US media demonizes Maduro and the United Socialist Party, calling them “dictators” despite their record of legitimately winning elections by large margins. The Venezuelan “opposition” has grown increasingly violent, burning buildings and rioting, all while being supported by the United States.

Venezuelan officials have stressed that these massive efforts are “not enough.” They want to be part of a global conversation about creating a long-term plan to combat the climate crisis, and to ensure safety and security for future generations. Salerno called for a “revolution within the UN” to allow programs to be implemented on an international level. Venezuela hopes that a legally binding agreement can be established to fight climate change, and all states can be obligated to take certain measures.

If the economy continues to be structured as it currently is, under the command of a small group of western bankers on Wall Street, in London, and in Berlin and Frankfurt, things will not change. Venezuela, moving toward socialism with its “Bolivarian Process” is leading the world in fighting climate change. It has taken great measures within its own borders, and it hoping to pull other countries along the road of ecological security. It should be no surprise that such sweeping measures toward building a better future for the planet by restructuring the economy, come from a country that has broken out of Wall Street’s control.

As China leads the world in green technology, and Cuba is being praised for its urban gardens and energy efficiency, why should anyone continue to think that Wall Street has the answer to the climate crisis? Commercials about “beyond petroleum” and marketing gimmicks about “organic” and “ecofriendly” products will not save us.

Salerno described the process in Venezuela as “changing things from the bottom up.” Such changes are only possible with the overturning of the current economic set up, where billionaires lead us toward war, poverty and climate disaster.

The statements, views and opinions expressed in this column are solely those of the author and do not necessarily represent those of RT.

Caleb Maupin is a political analyst who lives in New York City, and is an activist with the International Action Center and Workers World Party.