The hunger eradication initiative of the United Nations has been named, “Hugo Chavez Frias” 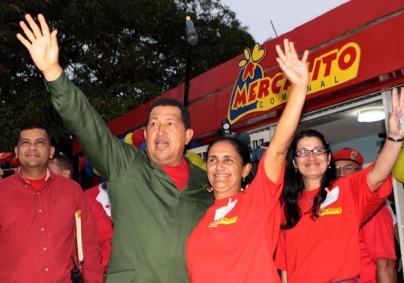 According to Raul Benitez, the Food and Agriculture (FAO) Director for Latin America and the Caribbean.

“It is the best way that we have to honor this man who was such a visionary in this area. He was 10 years ahead of the rest of the world leaders and he was effective,” he said on the program Cruce de Palabras [Intersecting Words) that is transmitted on Telesur.

He explained that at the moment the organization is making strides applying a program that will permit the less fortunate sectors of society to have access to nutrition.

“We have never produced as much as we do today, yet 840 million people are starving around the world. In Latin America and the Caribbean there are 47 million brothers and sisters who suffer from starvation. The problem isn’t in the production of food, but access to it.” At the same time he expressed that the regional bloc CELAC (Union of Latin American States and the Caribbean) is the one that has mostly advanced in its fight against hunger during the last couple of years.

He also emphasizes the commitment by multinational organizations such as Unasur (Union of South American Nations), Mercosur, CELAC, Petrocaribe and Caricom to eradicate hunger.

“The political commitment to eradicate hunger by these multinational organizations which play a role in the region has been incredible”.

The country who is of greatest need at the moment is Haiti, but “the intensity by which his (former Pres. Chavez’s) government pursues this gives me optimism.” At the same time, the country that has mostly advanced in this area is Nicaragua.

Benitez pointed out that the FAO plans to eradicate hunger in the region before 2025, “and I think we will accomplish this.”