Yesterday members of the Venezuelan national government inaugurated another chocolate factory, part of a push to increase local production of a product which for centuries was Venezuela’s main export, but was always processed and consumed overseas.

The new Cimarron plant in Los Teques, Miranda state will be able to produce 600 kilos of chocolate daily.

Two types of cocoa bean, and one hybrid of the two, are currently grown in Venezuela, and are native to the country. From 1600 until the 1820s, the cocoa bean was cultivated all over the country and made up 75% of Venezuela’s exports. However Spain was the main buyer, and once Venezuela became a republic, cocoa production and exporting halved. Following the emergence of the oil industry, the production of cocoa as well as most other industries took a back seat.

Currently, despite continued cultivation of cocoa, little chocolate is available in Venezuela for locals, and what is available is expensive and mostly produced by foreign transnationals such as Nestle (Savoy brand).

The new Cimarron plant, “has the capacity to cover the market in [part of Miranda], and something else that’s important, is the capacity to export to the Common Market of the South (Mercosur),” said foreign minister Elias Jaua at the inauguration.

The government invested Bs13 million in the plant, and it currently employs twelve people directly, and 141 indirectly. Its machinery comes from Italy. It will mainly produce chocolate balls that are solid or have a filling, and chocolate blocks.

Jaua said more chocolate processing plants will be inaugurated soon in the states of Barinas, Monagas, and Sucre. The Cimarron plant is operating in old Silca textile warehouses, which had been abandoned and its workers unpaid. The Venezuelan government took over the warehouses two years ago and paid the debt owed to the textile workers. A cotton plant will also be set up in the warehouses.

Cimarron and Oderi are the two state chocolate companies. In 2010 the Socialist Corporation of Venezuela was created as part of the government’s aim to promote and increase chocolate production. It supervises and coordinates the state’s activities in the chocolate sector and develops policies to improve the quality of life of producers. 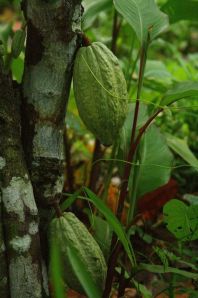 Oderi and Cacoa Venezuela currently have eight chocolate shops in the country, with the aim to set up several more this year. The shops sell hot and cold chocolate drinks, chocolate powder, chocolate blocks, chocolate liquor, cakes, deserts, and natural yogurt from the state owned Lacteos Los Andes, all at below market prices.

The president of Oderi, Edgar Rivas said earlier this month that the chocolate Oderi makes is “of excellent quality and produced from the best Venezuelan cocoa beans”. He explained how other companies “cut costs and make their products more profitable using little cocoa and a lot of sugar and flours… that’s why the majority of Venezuelans are accustomed to sweet chocolate and we’ve been instilled with the idea that chocolate is fattening, but in reality it’s not, good chocolate…doesn’t cause weight gain”.

In 2011 cultivation of cocoa was the area which received the most financing by the Fund for Socialist Agrarian Development (Fondas) and the Agricultural Bank of Venezuela (BAV), for Bs94 million in credits out of a total of Bs234 million.

Today the minister of science and technology, Manuel Fernandez, visited one cocoa producing community in Delta Amacuro which benefited from that financing in 2011. Forty cocoa producers, who together call themselves the Socialist Productive Network of Cocoa, have “increased their knowledge, their technical capacity, and have modernised their machinery and increased social gains,” the minister said.

The producers presented a proposal for a cocoa processing plant in their area to the minister, which he said he would analyse.

« We Have a Duty to Care About Earth’s Right to Life
“THE COMMUNE OR NOTHING”: POPULAR POWER AND THE STATE IN VENEZUELA »