(VIDEO) The Venezuelan people said “No to GMOs” 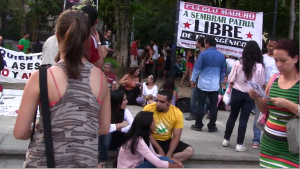 May 28, 2013. – On Saturday, May 25, there were protests throughout the world against Monsanto, the world’s largest transnational producer of chemicals and genetically modified seeds. In Venezuela, different groups came together in a large protest in the Museum Square and warned against the entry of GMOs into Venezuela.

One of the most notorious products of Monsanto is glyphosate, known commercially as Roundup, which according to scientists is not biodegradable and poisons the soil. In the past, Monsanto was also one of the companies that developed and supplied the famous Agent Orange in the 1960s that was sprayed in the jungles of Vietnam to destroy crops of the Vietnamese people in order to leave them without food and to clear vegetation to leave no space to hide. This deadly gas caused more than half a million deaths among the Vietnamese people and thousands of children were born with birth defects.

Member of the National Assembly Braulio Alvarez. peasant leader Jose Pimentel and Gabriel Gil feeding ministry office in a press conference in Caracas on May 25

Monsanto has committed many crimes and has been involved in many scandals, for instance, its policy of bribes to officials to influence the entry of their products into countries seeking to ban the entry of GMO seeds to grow “Frankenfoods.”

In Venezuela, President Chavez in 2004 banned Monsanto from undertaking a project to cultivate 20,000 hectares of genetically modified soybeans. He was aware of the damage caused by GMOs and was therefore against their use. In the Venezuelan Constitution, Article 127 prohibits the patenting of genomes of any living beings. Several movements have recently sounded the alarm, concerned that a reformed Seed Act, if approved, would allow transgenic entry to the country. 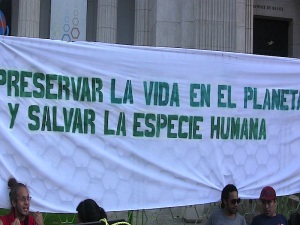 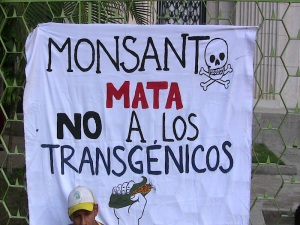 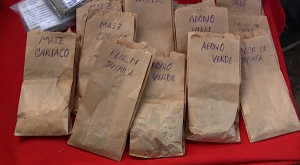 In a series of interviews on Venezuelan National Radio, several activists expressed their concern over the possible reform of the Seed Law, such that Article 1 of this law, instead of saying that seeds be protected as the natural and cultural heritage of Venezuelans, would encourage the production of seeds by researchers and favor the rights of the “breeders” who are those who privatize seeds. Most of them are researchers of the opposition found in the institutions, but working in the interest of transnational capital and not in the interest of food sovereignty, therefore this law would be designed to protect breeders and has nothing to do with food sovereignty. They added that they thought that transgenic seeds would enter the country as “contraband”, but from what they can tell, GMO seeds will enter legally, because in Chapter 2 of the Act, there are five items that allow the entry of GMOs, and that in the “National Seed Center, if you are registered on the list, you can bring GMOs into the country.” They added that in Colombia, farmers have been stripped of their right to plant their own seeds and if they do they are criminalized. And in one of the articles of this law, there is a criminal sanction for tax units that violate the rights of the breeders.

They ask that this law be debated in the National Assembly, with all present on June 18 to discuss it.