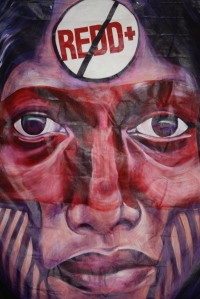 After more than 500 years of resistance, we, Indigenous Peoples, local communities, peasant farmers, fisherfolk and civil society are not fooled by the so-called Green Economy and REDD+ because we know colonialism when we see it. Regardless of its cynical disguises and shameful lies, colonialism always results in the rape and pillaging of Mother Earth, and the slavery, death, destruction and genocide of her peoples. Rio+20’s Green Economy and REDD+ constitute a thinly-veiled, wicked, colonialist planet grab that we oppose, denounce and resist. Rio+20 is not an Earth Summit, it is the WTO of Life.

Just as historically the Doctrine of Discovery was used to justify the first wave of colonialism by alleging that Indigenous Peoples did not have souls, and that our territories were “terra nullius,” land of nobody, now the Green Economy and REDD+ are inventing similarly dishonest premises to justify this new wave of colonialization and privatization of nature. Indigenous Peoples and peasants are being killed, forcibly relocated, criminalized, and blamed for climate change. Our land is being labeled “unused,” “degraded” or in need of “conservation” and “reforestation,” to justify massive land grabs for REDD+, carbon offset projects and biopiracy.

But what exactly is the Green Economy and REDD+? The Green Economy is nothing more than capitalism of nature; a perverse attempt by corporations, extractive industries and governments to cash in on Creation by privatizing, commodifying, and selling off the Sacred and all forms of life and the sky, including the air we breathe, the water we drink and all the genes, plants, traditional seeds, trees, animals, fish, biological and cultural diversity, ecosystems and traditional knowledge that make life on Earth possible and enjoyable.

The Green Economy is the umbrella for all kinds of ways to sell nature including REDD+, the Clean Development Mechanism, carbon trading, PES (Payment for Environmental Services), the financialization of nature, the International Regime on Access to Genetic Resources, patents on life, TEEB (The Economics of Ecosystems and Biodiversity), natural capital, green bonds, species banking and state and business “partnerships” with indigenous peoples. Under the Green Economy, even the rain, the beauty of a waterfall or a honey bee’s pollen will be reduced to a barcode price tag and sold to the highest bidder. At the same time, the Green Economy promotes andgreenwashes environmentally and socially devastating extractive industries like logging, mining and oil drilling as “sustainable development.” Nothing could be further from the truth.

REDD+, like carbon trading and the Clean Development Mechanism, is a false solution to climate changepromoted by the United Nations, the World Bank and climate criminals such as Shell and Rio Tinto, which allows polluters to continue to burn fossil fuels and not reduce their emissions at source. Officially, REDD+ stands for Reducing Emissions from Deforestation and forest Degradation. But, REDD+ really means Reaping profits from Evictions, land grabs, Deforestation and Destruction of biodiversity. REDD+ constitutes a worldwide land grab and gigantesque carbon offset scam.

Originally, REDD just included forests and plantations, but its scope has been expanded to include GMO trees, soils and agriculture. Ultimately, REDD+ may try to include and expropriate the entire surface of the Earth including most of the forests, soils, fields, grasslands, deserts, wetlands, mangroves, marine algae and oceans to use them as sponges for industrialized countries’ pollution. REDD+ is also the pillar of the Green Economy and has been blasphemously heralded as “the spiritual core” of the “business plan” that the governments of the world are writing for the planet. REDD+ turns the sources of life on Earth into carbon garbage dumps; it turns the planet’s wombs into tombs. But we are not going to let this happen!
Maybe the Green Economy is called green because that is the color of the dollar and maybe REDD+ was so dubbed in anticipation of its bloody consequences. Ask Olivia Mukamperezida, mother of Friday, an eight-year-old boy from Uganda who, according to The New York Times, was killed when his home was burned to the ground as over22,000 small farmers with land deeds were violently evicted for a carbon offset plantation. Ask farmer Antonio Alves who was persecuted, arrested at gun point and thrown in jail for 11 days by Força Verde, the armed guards of Chevron’s REDD+ project in Brazil, for cutting down a tree to repair his mother’s leaky roof. Ask Chief Daniel Jiménez of the Matsés People of the Peruvian Amazon who had criminal charges brought against him for defending his people against an exploitive REDD+ contract in a foreign language that gave the carbon trader total control over the Matsés’ rainforest and way of life, forever. Ask the Batwa Pygmy People who have suffered servitude on the World Bank’s Ibi-Batéké Forest Carbon Plantation in the Democratic Republic of Congo. Ask the Ngaju Dayak People of Indonesia who have denounced the Kalimantan REDD+ project because it generates conflict and violates their right to free, prior, informed consent enshrined in the UN Declaration on the Rights of Indigenous Peoples.

These examples help us all see through the shameful lies and crass propaganda that try to hide the truth about REDD+. We know that REDD+ is not about saving the climate or protecting forests or eradicating poverty or distributing “benefits” or empowering women. Even the United Nations itself admits that REDD+ could result in the “lock-up of forests,” “loss of land,” “conflict over resources,” “new risks for the poor” and “marginalize the landless.”

In fact, all the negative impacts of REDD+ that the UN foresaw are already happening. For example, in Africa, REDD+, carbon credits, agrofuels and export crops, are driving huge land grabs. Furthermore, since REDD+ now includes plantations and agriculture, already existing plantations, agrofuels and export crops could soon become carbon offset projects as well. Experts are warning that three-quarters of Africa’s population and two-thirds of its land are at risk and that REDD+ may create “generations of landless people.” In Africa, REDD+ is emerging as a new form of colonialism, economic subjugation and a driver of land grabs so massive that they may constitute a continent grab.

Meanwhile, inaction on climate change, masked by false solutions like REDD, is allowing the Earth’s temperature to rise 2 degrees or more, which effectively melts the Artic, incinerates Africa and drowns the Pacific. Nine countries are disappearing under the waves as the sea level rises in the Pacific where 90% of the population is indigenous. This constitutes climate racism and cultural genocide on an unprecedented scale.

Unfortunately, REDD+ affects all regions of the world and all social sectors. For peasant farmers, REDD+ constitutes a worldwide counter-agrarian reform and perverts the task of growing food into “farming carbon.” “Climate Smart Agriculture” is not smart, it is dumb. Moreover, “climate-ready” seeds and other supposed GMO climate fixes are just more attempts of Monsanto, the biotech industry and agribusiness to deform, patent and control our seeds, grab our fields and turn us into landless, indentured peons.

Applying a gender analysis to REDD+, it is clear that REDD+ also constitutes a new form of violence against women because it limits or prohibits women’s access to the land where we farm, gather food and draw water to feed and quench our families. Similarly, for Indigenous Peoples, REDD+ threatens our cultural survival and is potentially genocidal since REDD+ proponents want to expropriate and control the majority of the forests and 80% of the world’s biodiversity, which is found in our lands and territories. For fisherfolk and coastal communities, Blue REDD, that is doing REDD+ in the oceans and the waterways, could profoundly limit our fishing, thus undermining our sustenance and way of life. As for workers, we know that the jobs created by REDD+-type plantation projects tend to be fewer than promised, the wages and labor conditions poor, the right to unionize often violated and the exposure to carcinogenic pesticides high.
But REDD+ is not just destructive for adults. For children, youth and future generations, REDD+ and other false solutions to climate change, like large hydroelectric dams such as Belo Monte, agrofuels, “clean” coal, nuclear power, natural gas, hydraulic fracturing, nanotechnology, synthetic biology, bioenergy, biomass, biochar and geo-engineering, endanger the future and life as we know it. Instead of helping to reduce global warming, they poison and destroy the environment and let the climate crisis spiral exponentially, which may render the planet almost uninhabitable.

Heeding the wisdom of our elders and the prophecies of our ancestors, we launch this call for No REDD+! in Rio+20 and invite you to join us in planting this seed in the consciousness of the peoples of the world. Mother Earth, wounded and racked by pollution-induced fevers, is imploring us to change paradigms. Only a path which:
Rejects REDD+ and the Green Economy as Privatization of Nature;
Decolonizes life, land and the sky;
Defends life and liberty;
Respects human rights;
Guarantees Indigenous Peoples’ rights;
Honors Mother Earth and
Protects the Sacred,
will save the world and allow us to live well and create the “future that we want.”

« At Rio+20: Values versus prices
Lethal ingredients in the Rio+20 mocktail »