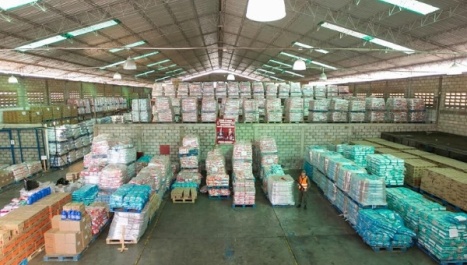 A warehouse full of essential items was discovered in the western state of Zulia on January 12, 2015, the seized good will be sold via government stores | Photo: Venezuelan Vice-Presidential Press

Shortages of Venezuela’s heavily-subsidised basic products have been caused largely by Colombian smuggling, and hoarding in the country due to speculation.

Another massive stockpile of hoarded essential goods have been found in a second warehouse owned by the Herrera company, the Venezuelan government announced Wednesday.

The company, which has links to political opposition groups, was found to be hoarding goods in another warehouse earlier this week.

Venezuelans have been faced with product shortages and long lines at stores, in large part due to deliberate hoarding by companies, such as Herrera.

The governor of the state of Zulia, Stella Lugo, stated that hoarded products were also discovered in three warehouses in her state.

Venezuela’s vice president, Jorge Arreaza, said that the recovered products will be handed over to the Commerce Ministry to be distributed and sold to Venezuelans at regulated prices via government stores.

Government officials also announced that 11 people will be charged in connection to their role in the hoarding of essential goods.

Arreaza expressed regret that companies such as Herrera, which has investors with links to the opposition Popular Will party, would join in right-wing efforts to destabilize the country by creating artificial shortages.

“The Venezuelan people can clearly identify who is denying them (essential goods), who is hiding it from them, who is hoarding products from them,” said Rosalio Torrealba, a member of the ruling government coalition.

The right-wing opposition is attempting to exploit the issue of shortages in order to oust the government of President Nicolas Maduro.

On Wednesday, opposition leader, Henrique Capriles called on his supporters to take to the streets and demand a change of government. This is the second time this week Capriles has called for people to protest and several incidents of violence have already been reported throughout the country.

Capriles was the opposition candidate in presidential elections in 2012 and 2013, losing both times.

« Spring-Break-March Delegation to Venezuela: The Revolution Continues!
Revolution, Counter Revolution and the Economic War in Venezuela »