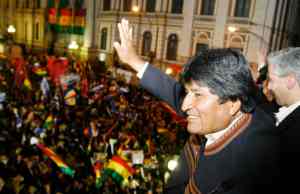 The government of Latin America’s poorest country is taking natural resources out of the hands of multinationals, and using that wealth to fight poverty

Bolivia is demonstrating to the world why nationalising natural resources is a crucial first step for any government seeking to put people and the environment before profits.

On May 1, 2006, less than four months after becoming president, Evo Morales decreed the nationalisation of the country’s gas reserves. This move restored state control over the strategic resource. In doing so, Morales followed through with one of his key election promises and met a historic demand of the Bolivian people. The people had overthrown successive presidents unwilling to take Bolivia’s gas out of the hands of greedy transnationals.

Given the status of gas as Bolivia’s key resource and source of wealth, it was no surprise that this resource came to be seen as a vehicle for lifting the poorest country in the region out of its misery. Despite promises by neoliberal politicians and institutions such as the World Bank that privatisation and free market economics would lead to improved living standards, the number of Bolivians living in poverty had swelled to more than 66% by the turn of the century.

The decline in state revenue due to the privatisation of the gas industry meant the Bolivian government was increasingly dependent on foreign loans to cover its shrinking budget. This began to change with the nationalisation decree and subsequent re-negotiation of contracts with gas transnationals. Under the new contracts, transnationals no longer dictate what happens in the industry. Now, the Bolivian state sets the terms.

Claims that transnationals continue to dominate the sector and extract the majority of Bolivia’s gas misrepresent the real situation. Under the new service provision contracts, the state not only owns the gas deposit but also extracted gas and the profits arising from its sale.

Given the almost complete dismantling of the state-owned YPFB gas company during the period of neoliberal privatisation, the state still requires the services of transnationals. These private companies are hired and paid for their services, but the transnationals have no say over how much should be extracted, or what happens to the final product.

At the same time, the Bolivian government is working to strengthen YPFB so that it can take full responsibility for extraction and processing.

Importantly, more than 80% of all profits from the industry now go to the state via taxes, royalties and other means.

Despite headlines saying such actions would lead to foreign companies pulling out of the country and the collapse of the sector, Bolivia’s gas industry remains strong.

In fact, Bolivia’s economy has registered record growth rates despite the global economic downtown. But the key driving force behind Bolivia’s gross domestic product growth (which has averaged close to 5% a year between 2006 and 2012) has not been external demand, as claimed by those who say the economy has become more dependent on the global economy due to a boom in raw material exports.

In fact, figures from Bolivia’s National Institute of Statistics (INE) indicate that external demand made a negative contribution to growth. The real driving force behind Bolivia’s growth was the explosion in internal demand, which averaged 5.2% a year during this period.

This is the result of a dramatic redistribution of wealth to the benefit of the poor majority.

As state coffers began to fill up with revenue from the gas sector, government spending on health and education grew almost fourfold between 2005 and 2012. The government also began paying social security to pregnant women, families with children in primary school and pensioners. Today, 31% of Bolivians benefit from these payments.

Together with a raft of other measures, such as rises in the minimum and average real wage, initiatives to cut unemployment and price controls on staple foods, these policies have made the poor richer and lowered wealth inequality.

Some environmental critics of the government argue that hydrocarbons nationalisation has done nothing to lower Bolivia’s economic dependency on the extraction and export of raw resources, in this case non-renewable resources. The greater revenues, they allege, are simply used as handouts to the poor to quell popular discontent.

However, as Bolivia’s Minster of Economy and Finance Luis Arce noted in Economia Plural, the Bolivian government is promoting a “New Economic, Social, Communitarian, and Productive Model” to replace the neoliberal model. Under this new model, the government now prioritises stimulating the internal market, an important step towards reducing dependency on foreign capital and global demand.

This requires not only wealth redistribution but also the transfer of wealth generated in extractive sectors (primarily gas, but also mining) toward the industrial processing of natural resources. Another task is stimulating the manufacturing, tourism, housing and agriculture sectors to to meet this demand.

The government has made clear it prioritizes communitarian, cooperative, and family-based enterprises.

As far as industrialisation is concerned, an important step was taken on May 10 with the inauguration of the Rio Grande gas liquids separation plant. Construction of a second plant, Gran Chaco, will be completed sometime next year. Combined, these two state-owned plants will have the capacity to supply all of Bolivia’s gasoline and liquefied petroleum gas needs, as well as allowing the country to export processed gas.

The Bolivian government is also carrying out studies for building a third plant that would enable the country to become self-sufficient in diesel. It has also begun building a urea and ammonia plant, which represents the single largest state investment project in Bolivia’s history.

The government has also embarked on a number of experiments with small state-owned enterprises in the area of food processing, gold and cardboard production. The plan is for these companies to be handed over to local communities to run as part of fostering the communitarian sector.

Viewed as a whole, the measures taken to recover sovereignty over Bolivia’s economy have meant that the state has become the central player in the national economy. Today, more of Bolivia’s wealth stays in Bolivia and is used to expand the internal market, promote industrialiszation, and stimulate the communitarian sector.

If this is what a small, landlocked Andean country that has historically been relegated to the subordinate position of raw materials exporter can achieve, imagine what we could begin to do in Australia if we nationalised the mines and put our natural wealth back in public hands.